Where are the Druids when we need them?

There are modern-day Druid groups who gather in England, but we in BC too need to find our inner Druids.

The word means "people of the oak" (the queen of trees), but all trees are druidical.

Ancient Druids considered Nature the sacred Source (nature-native-nativity) the Truth-deity whose name was at first only spoken, sung about by the bards but not written down. Later, they did write their wisdom in an ancient Irish alphabet called Ogham, in which each letter takes the name of a tree.

Scholars write that the first Druids named Truth itself a deity, the sacred word of Nature. It was "hallowed" (whence the words holy, wholly, hale/hail, haelen, healing and health). We still know that nature heals and nature speaks; some people hear it all the time. Next time you pass a tree, give it a greeting: "Hail fellow well met". Trees hear us, too. 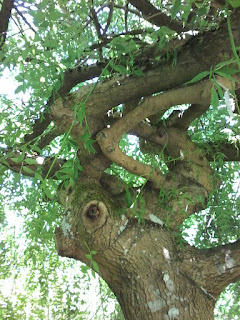 We need more people who think like Druids, who don't call trees a "resource" or a "product" important to "the economy". Or a thing that stands in the way when we want to erect a building in its space. To Druidic-folk each tree is inseparable from the rest of tree-society and its companion species, a being that has standing which our legal system doesn't recognize, not being as subtle as the Druidic law which was recited throughout northern Celtic and pre-Celtic Europe by the law-singers. Their way, everyone knew what the law was. Through repetition it was remembered.

Unfortunately, as waves of newcomers (Romans and such) marched across the Celtic lands with their own ideas about law and governance, it was forgotten. Lots of ancient Roman scribes got the gist of it down on paper however, although -- naturally -- not agreeing with each other about its meaning.

Today we (especially urbanites) must take from Druid lore what we can in the struggle for tree conservation. Science is crucial of course, but science increasingly brings knowledge of sub-cellular, meta-genetic vibrational phenomena pervading the natural world. Gaia Spirituality, in other words -- another way of ancient knowing that keeps breaking through, still. Even in a barren, digital, robotic, virtual world it breaks through, but for how long? Here's a question about the future: how will Artificial Intelligence be capable of achieving that "way of knowing"? Quo vadis, Humanity? 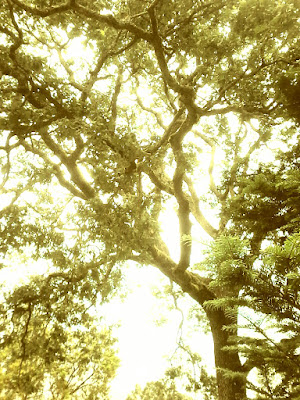 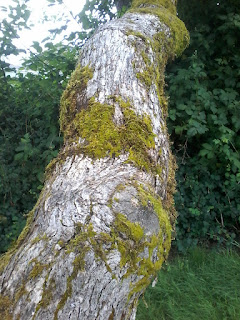 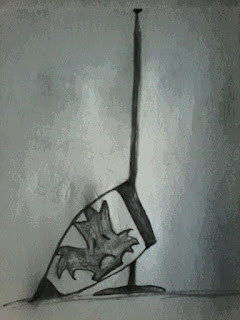 Old Macdonald had a farm

and on that farm he made a life

With a bank loan l here and a workforce there,

here a flood, there a fire, everywhere another care,

and shaped the countryside

Old Macdonald made the wealth

of Canada though toil,

when settling he broke soil,

and Macdonald took a wife

without whom he'd have led no life

Thank Macdonald for our health,

and Mrs. Mac for Canadian wealth 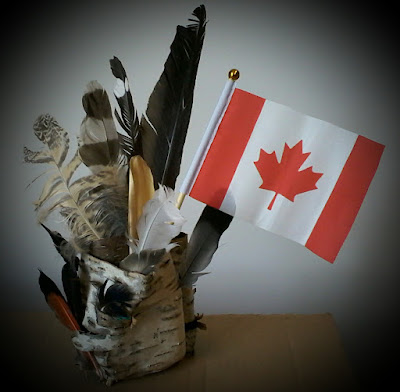 Posted at 10:01 AM No comments:
Labels: Canada, History - Canada

For British Columbians who want to watch the TV programming which offers the best-quality documentaries about Trees, Nature, Gardens & Wildlife, you can't beat Knowledge Network.

At least, you couldn't until now. Its Board (and pressure groups) have decided to put ideology before quality by firing their well-regarded CEO and host, Rudi Buttignol for doing an excellent job.

On their own website, KN tells us it offers "Curated content from all over the world and award-winning Knowledge Originals documentaries you won't see anywhere else."

That seemed to be true. Apparently KN was so unbroken they had to fix it. They had to mandate a 50% abandonment of quality in favour of a 50% addition of "diversity" -- diversifying into content considered racially-inclusive instead of the kind of content that has made the network loved by viewers and donors. Like BC's Provincial Museum, BC's televised Knowledge Network has decided to go "anti-colonialist". (So forget about those well-loved British dramas too, as well as the nature programming.)

Outgoing CEO Rudi Buttignol has been repaid for achieving excellence by being dumped by the Board. And he had that well-liked courteous soft-sell manner of inviting donations. Why do we get the feeling there won't be any soft courtesy now, but rather aggressive identity-group-hustling?

Posted at 9:27 AM No comments:
Labels: ideology, Knowledge Network BC

About to be evicted from habitat by development, the animals are holding a Yard Sale. Their "yard" is a field, and their homes are trees, shrubs and ponds. Developers will pave the fields, drain the ponds and chop down the trees. Now, the animals lay out their wild-ware for a Field Sale.

"Here's a collection of nests," say the robins and sparrows. "Two worms a piece."

"This lily pad sells for three worms," says Frog. "It's a good thick green one. I don't know what I'm going to doze on now."

"We've got a lot of pollen to offer," announce the bees. "We over-harvested, it'll go cheap, a real bargain."

"I'm going to transport my acorns elsewhere," says Squirrel. "I'll have to find new storage. Blue Jay might share the cost with me."

"You'll have to search out a big luscious garden nearby, Deer, full of foliage."

"Are there still such places?"

"I don't see a lot of customers," frets Frog. "Who's going to buy all our stuff?"

"Sorry to tell you, but most may end up in the landfill-compost. The crows will swoop down and take a few items at the last minute."

"They'll give you a few feathers."

"What do I want with feathers?" croaks Frog.

"What are YOU selling, Raccoon?"

"A bit of recovered insulation foam, but most of it we'll store in a hollow log we know of. When the hideous human monster houses are built, we'll come back and move into the basements. We can sub-let to rats, if necessary."

"I'll have to move on," mourns Robin. "You'll be okay, Chickadee, you'll find some eaves to nest in. Want to buy some nesting grasses to take with you?"

"Thanks, Robin. Two worms, you said?"

"I'm worried about the homeless feral cats near here." says Deer, "and that old horse in the bottom field. Where will HE go? He won't be invited to graze on someone's lawn, that's for sure."

"We'd need to enlist domestic animals as well," trilled Robin. "Pets: they're the animals with influence."

"Okay! Who volunteers to sit on the Board?"

"Or like sitting on a lily pad?" asks Frog. 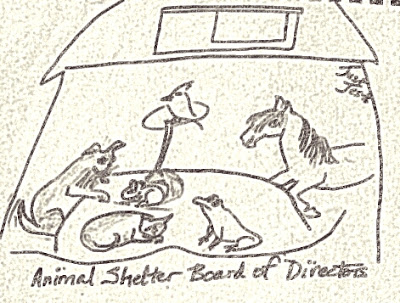 In the face of unemployment and homelessness in late 19th century London, England, reformer Octavia Hill mobilized housing strategies that worked. Maybe they could work today. She recruited a veritable army of building-providers and social workers (although the term wasn't in use yet; she invented the profession), who managed the housing schemes she began by buying properties, teaming up with others of means and renting them at low cost to workers for whom jobs were found.

Each cottage, she decreed, must have "its own front door", and each housing site be surrounded by greenspace. She emphasized the importance of fresh air, and "bight gleams of sunlight falling softly on a tree" as essential for morale and physical and mental health. She was involved with John Ruskin and others in the Commons Preservation Society, later called the Open Spaces Society.

Do we in Victoria, Vancouver and other cities care about "Open Spaces preservation" as we become ever more hemmed in by concrete and the looming towers of housing "units"?

Octavia Hill realized that housing and employment must go hand in hand if an economy is to work. We are seeing now that welfare housing for a population of the chronically jobless (and sadly, substance abusers) does not work. We have both a worker shortage and a "disability culture" and the linkage is as clear today as it was in Octavia Hill's time -- but we don't have enough "Hills" brave enough to discuss it. She and her allies believed in building "character" as well housing -- but that ideal is long-gone from our culture.

Eventually though we'll have to look beyond hand-wringing enabling charity which is not in practice at all charitable. Is it not demeaning to tell people they are victims of "systemic" this and that, and can't manage their own fate?

"Fate" is of course a pretty overwhelming and layered concept, and we live on a planet fated to struggle with the reality of human overpopulation. Our little corner of it is becoming as overcrowded as were the London boroughs in Octavia Hill's time, and it might be worthwhile to look again at the remedies she came up with: the blending of helping hand, personal responsibility and preservation of urban greenspace. Mere building and warehousing of the dependent is not an answer, nor do humans flourish in a physical environment of overbuilt brutalist ugliness.

A Setback For Privilege

The words privilege and privacy have the same root, and they overlap in meaning. The "privileged" class within a town has historically meant those with homes set in garden space, under the shade of trees and behind discreet hedges. In other words, privilege means privacy.

Naturally enough the folks who are crowded into dense housing crammed alongside public thoroughfares, subjected to prying eyes and other people's noise, resent those who have space and peace. Today, we talk about making things equitable. Regarding urban planning this sadly means densifying neighbourhoods and lowering quality of life -- but equally.

Quality of life is lowered when nature-space and green aesthetics are eliminated, gardens paved, the hedge replaced by the surveillance camera, the luxurious lawn criminalized. When this happens people's health suffers, physical and mental. They do less outdoor exercise and experience stress from overcrowding and noise.

Not only people but wildlife suffers: without gardens to forage in, pollinators (bees and other insects plus non-insect pollinators such as hummingbirds) decline -- over 30% of insect and bird species are now going extinct with the loss of plant diversity. And the big trees go; no room for them. Then drought and heat become extreme. The equitably-shared decline in quality of human life and health is also a setback for nature.

The current push for high-density multi-unit housing tightens this downward spiral. That other kind of "setback" -- property setback rules created by urban planners of the past which specified legal distance between houses, roads and other houses -- was meant to protect landscape and ecology. In our haste to undo the privilege of privacy we have taken away ambient ecological and aesthetic assets from everybody.

To meet the need for housing we could either dampen demand (noting the "build it and they'll come" rule), or try to meet that demand (although we never will, given the above-noted rule) while retaining ecological and aesthetic values. In other words: privilege everybody. If we must endlessly build, we could at least maintain real estate setback rules around the multi-unit dwellings being proposed, leaving room for big trees, and not killing the pollinators. 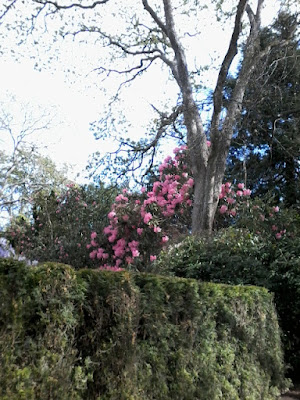